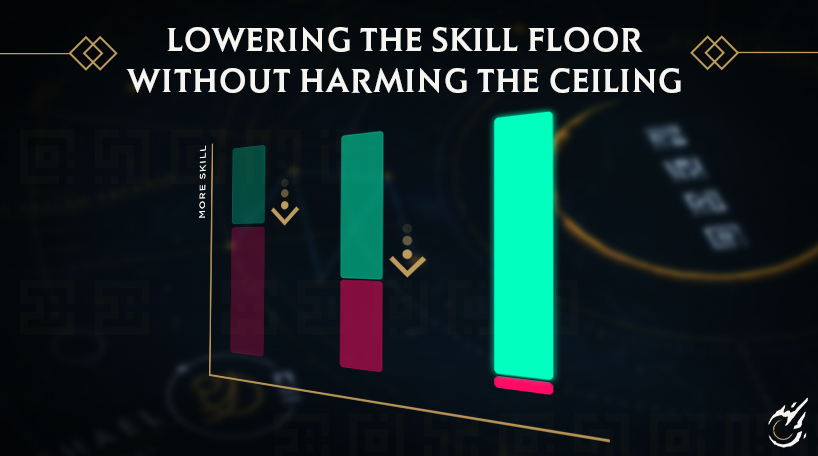 In our last article, we talked about why a low skill floor helps grow the playerbase, and why keeping the skill ceiling high is so important for competitive games. (It’s a quick read; recommended if you have some time!) This time around, we’re gonna talk about how we’re going to do that, but we first need to elaborate on how we want to interact with the skill ceiling.

Our goal with IMMORTAL is not to leave the skill ceiling utterly untouched. Rather, we are making sure to not harm the skill ceiling—in other words, make sure the change makes no impact on human play. If it does harm the skill ceiling, we then figure out how much to compensate for that change in other areas of play. With this in mind, we’re able to provide hardcore and pro players the satisfying high-skill experience they’re looking for. In fact, almost all high-level and pro players that have played IMMORTAL (and its predecessor, Vanguard Prototype) have said that the game feels just as skillful and engaging as other competitive RTS games.

SIDE EFFECTS MAY INCLUDE…

We know that lowering the skill ceiling causes serious issues with competitive play. Many of us know what some of the biggest games do to create a high skill ceiling, but there’s also some baggage that comes along with those techniques that substantially increases the skill floor. Let’s take a look at a few of the biggest offenders:

THE PRINCIPLE OF THE THING

The last thing we want to discuss before talking about specific solutions are the broad concepts we’ve discovered over the years. We’ve covered a few of these in other articles, but for the sake of completion let’s hit all of our core principles one more time.

And now, at long last: the way to solve game design.

Not really, but here’s the solutions we’ve found work best to achieve the goals we’ve laid out. We’ll also talk about how much all of these systems impact both low- and high-level play, and how we work to make sure the game is fun to play at all levels.

Possibly one of our proudest innovations is the Unified Command Card: in IMMORTAL, all of your faction’s army abilities, available buildings, or available units can all be accessed through a single tab (the army tab, construction tab, and production tab respectively). Each tab is divided into the basic and advanced layer (which can be accessed through the space bar).

The hotkeys, designed by Tom Labonte and Colter Hochstetler (the brilliant minds behind StarCraft II’s The Core hotkey setup) are built to be ergonomic and comfortable, taking into account ability frequency, unit role, and more. Many of our hotkeys are built to make switching between factions easy by having units which fill similar roles (such as transports) on a similar key.

Macro (the systems around economy, production, and infrastructure) is the soul of most competitive RTS titles. It is one of the primary drivers of complex decisions (such as composition and upgrades) and allows for you to learn about what your enemy is doing with his resources if you can wriggle a scout into their base.

Macro is also, unfortunately, not the fantasy on the tin of the RTS genre. Most new players want to open a game, get their army onto the field as quickly as possible, and hold grand battles across the map. Imagine these players’ surprise when they launch StarCraft II and the only way for them to actually reach that experience is to stay on top of their worker production, deal with supply blocks, and create every bit of their army one-by-one-by-one.

We’ve taken a hammer to these pain points in the RTS space in a way that preserves almost all the decision-making. Here’s some of the highlights.

We’ve done what we can to make having to micromanage your workers completely optional. Town halls produce workers and automatically populate their nearest resource cluster to its maximum capacity, sending them to mine automatically. Creating a new structure simply requires you to press a button and order a structure to be built, and the nearest eligible worker will get to work. If workers have been pulled off of mining, they will return after a few seconds to make sure you don’t lose resources by simply forgetting to tell them to do their jobs. Finally, ether (your high-tech resource) doesn’t need to be gathered by hand, and you don’t need to assign a specific number of workers to each extractor—once you build the structure, the ether goes straight into your bank.

Put simply, your barracks and your houses are now the same structure. When players create new production structures, they are indicating that they want to expand their army, so we wrap this functionality into a single building. Creating your factories and airfields will allow you to have more units, in addition to being able to build more units at a time.

Military production structures are also not limited to the old-school “one archer at a time” speed of production. IMMORTAL’s structures can simultaneously build as many units as they have the capacity to support. In other words, a structure that provides 8 capacity (or supply, or population, etc.) can create eight 1-capacity units, four 2-capacity units, etc. at the same time. This means that if you have the capacity to support 200 capacity of units, you can build that entire army in a single production cycle.

All of these macro changes, in tandem, allow us to cull a lot of rote, decision-less mechanical tasks that are a requisite skillset in other RTS games, drastically dropping the skill floor. (Anecdotally, I’ve brought friends who have never touched RTS into early builds of IMMORTAL, which were missing huge swathes of accessibility features mentioned in this article. They were creating mid-sized armies, getting onto the map, and casting spells within 20 minutes and needed almost no explanation to get started.)

Of course, the removal of many of these tasks have also dropped the skill ceiling around macro by quite a bit. At a certain point in IMMORTAL, you have to distinguish your skillset and playstyle through other skills—pure macro won’t get you as far up the ladder as it does in other games.

In IMMORTAL, all military units you produce are automatically added to a default control group (we refer to this as your “main army” group). This functions similarly to “select all army” in other games, with one major exception: adding units to another control group automatically removes them from their current control group.

Through the use of pyre, Immortals can place beefy defensive towers at various strongpoints on the map, and players always spawn with a couple of towers already outside their base. These towers provide early vision of the map and a place to retreat when things go wrong, helping instill low-level players with confidence to move out onto the map.

IMMORTAL also introduces a creep camp-style system, where neutral units chill at various places across the map until they are provoked by one side or the other. Clearing these camps provides players with additional pyre.

Maps will include automatic gate structures at the entrance to the player’s main base (as well as across other points on the map as well). Activating these ancient gates will cost some resources, but can be quickly employed if you realize a huge early push is coming that you aren’t quite ready for. Once activated, allied units will be able to pass through, but enemy units will be blocked and need to destroy the gate to proceed.

There’s a lot more improvements where these came from. We’re constantly developing, learning, and improving, and a ton of our accessibility features are still deep in the bowels of development. One example is our in-depth tutorials system.

Ultimately, the changes we’ve made to really lower the skill floor either don’t affect the skill ceiling, or only affect it through the removal of mindless rote tasks. In principle and in testing, the loss of these tasks translates quite consistently into active participation out on the map, which makes it much easier for new players can find the fun of commanding armies. It also creates more highlight-reel moments between pros as they spend their attention on battles, pushing each other to the limit.