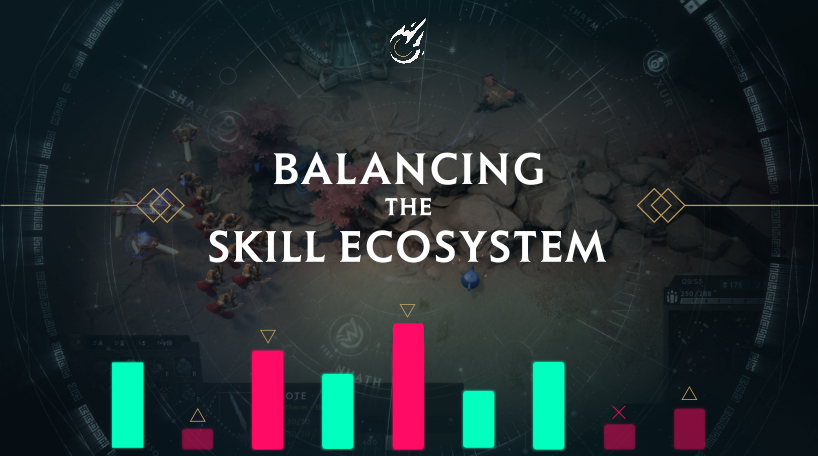 Every game has some skills that players must learn in order to really play the game. In most shooters, players must learn to aim before having fun (especially with precision weapons). In fighting games, you have to learn how to attack. In Ultimate Frisbee, you have to learn to catch the frisbee. These mandatory skills are the foundation of the skill floor, and along with optional skills (skill sets that allow players to improve at the game, but are not required to begin playing) and useless skills (“skills” which are challenging and often fun, but do not help or even hinder the player in achieving their goals) comprise the skill ecosystem.

While games will always have some mandatory skills if you dig deep enough (reading is a mandatory skill for almost all RPGs, for example), games with active and healthy playerbases tend to have lots of optional skills and as few mandatory skills as they can manage. As such, there are two “rules” within the skill ecosystem:

As such, there’s two major levers to pull when balancing a skill ecosystem.

As you might expect, wherever you can make mandatory skills optional is a huge win for accessibility. There’s three main ways to go about this, which all ultimately boil down to “gain a similar advantage another way.”

That last one can be a little abstract, but luckily there are examples to draw from. Team Fortress 2 and Overwatch help reduce aiming to an optional skill by introducing the Medic and Reinhardt, respectively. The Medic’s healing gun locks onto allies, while Reinhardt’s melee attack smashes everything in front of him.

By reducing aiming to “face in their general direction” in these compartmentalized play options, precise aiming is made optional. This opens up the genre to a whole new world of players who are bad at aiming.

While more optional skills is often better, there is a balance. Mechanics should be in line with the thematic and gameplay identities of a game. For instance, Dance Dance Revolution mechanics probably don’t belong in a gritty shooter. Generally, though, these additional skills not only allow players to enjoy the game in more unique ways, it also broadens the skill ecosystem, giving players more room for creative play.

In any game, having a variety of playstyles is great for accessibility and variety. In games with a competitive bent, it also allows for distinct play patterns for top players to make their name with. Some players are known for their ability to control certain units or how lethal they are with a particular weapon, or even an odd build with a particular hero.

Allowing for this unique mechanical identity at the professional level leads to memorable matches, and is driven by having a wide variety of optional skill sets that players can learn to specialize in.

Ultimately, the skill ecosystem determines what kinds of players can enjoy your game, and the balance of skills creates the skill floor and skill ceiling of the game. Skills that are mandatory to engage in the experience create a hard limit on who can play, and useless skills will be ignored. The more optional skills you have, the more healthy and welcoming the game environment can be.

Lowering Floors and Sparing the Ceiling

In our last article, we talked about why a low skill floor helps grow the playerbase, and why keeping the skill ceiling…